“Over the years there have been so many good memories and friendships our sport has bestowed on me and my family. I will not attempt to name all the great people we have met over the years through the sport, for fear that I might forget someone. After moving back to North Bay in the early 80’s it all started with the local West Ferris Ringette Association (part of the city of North Bay) inviting me out to tournaments to help give out medals to the players. At these events, it didn’t take long for me to realize the passion and love the girls had for their own sport of ringette. I was often a fill in for my mother, Agnes, when she couldn’t make it to the tournaments and let me tell you they were big shoes to fill. In 2003 they named a tournament the Agnes Jacks Invitational Tournament. Fast forward to 2007 when my only granddaughter started playing ringette with the Can Skate Program here in North Bay and now still plays with the U19A West Ferris 63’s. My wife and I as grandparents have had a great experience following her. As honorary chair of the World Ringette Championships held here in North Bay in 2013 and realizing all the hard work and dedication that goes into this tournament, I would to give a big shout out to Mississauga. They will be hosting the 2017 World Ringette Championships from November 27 to December 3 at Iceland Arena. I look forward to joining everyone in showing the world the pride and passion we have for our sport, the game of ringette.” – J Bruce Jacks, son of Sam and Agnes Jacks (North Bay, Ontario). 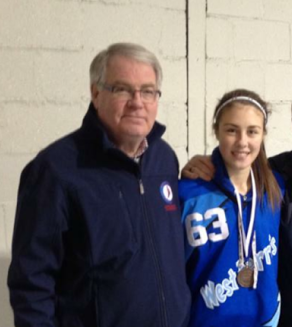