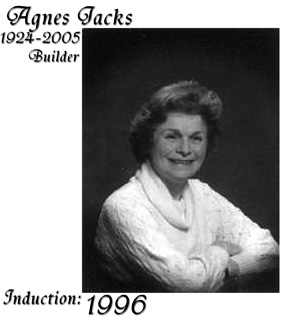 Agnes Jacks is the widow of Sam Jacks, who invented the sport of ringette back in 1964 in North Bay, Ontario. While the sport lost Mr. Jacks’ guiding hand through his untimely passing in 1975, the ringette community was delighted to find that his widow, Agnes Jacks, was enthusiastic to work, through promotion and public appearances, on behalf of the sport her husband so believed in. Over the years, Mrs. Jacks has shown herself to be truly dedicated, not only to the sport but also to the people in ringette. She attends a large number of tournaments and championships each season and never fails to provide just the right word of enthusiasm or congratulations to players, coaches, officials and spectators.

Ringette has benefited greatly from Agnes’ dedicated and enthusiastic promotion of the sport. The ringette community has appropriately laid claim to Mrs. Jacks as their very own goodwill ambassador. A Ringette Canada Scholarship Award has been named in her honor. This initiative was an easy one and was made to recognize the love and tremendous respect felt for this outstanding lady.

No better example could be found within the ringette community to inspire Scholarship Award recipients in their quest for academic excellence. The Agnes Jacks Scholarship Award is presented to ringette players, coaches and/or officials who have demonstrated a strong academic performance and a commitment to the sport of ringette. Recipients receive a $1,000 scholarship towards post-secondary education and also receive a Scholarship Award certificate recognizing their achievements. 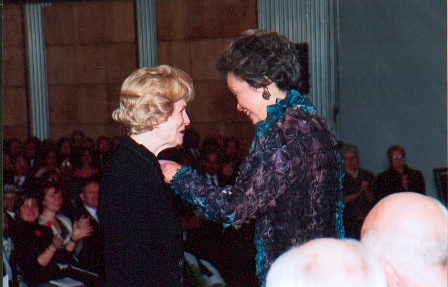 Ottawa, Ontario – October 25, 2002 – Ringette Canada is pleased to announce that Agnes Jacks was inducted as a member of the Order of Canada on Saturday, October 26th at 11:00 am (AST). Mrs. Jacks was recognized for her outstanding efforts on behalf of the sport of ringette in Canada and internationally.

She received her induction at a ceremony held at Pier 21 in Halifax, Nova Scotia, with Her Excellency The Right
Honorable Adrienne Clarkson, Governor General of Canada, presenting her with the Order of Canada Medal.

“It is extremely fitting for Agnes to be inducted as a member of the Order of Canada,” said Bill Hubbs, executive
director of Ringette Canada. “The entire ringette community is very proud to see her recognized with such a high
honor for her dedication and support of ringette over the years.” 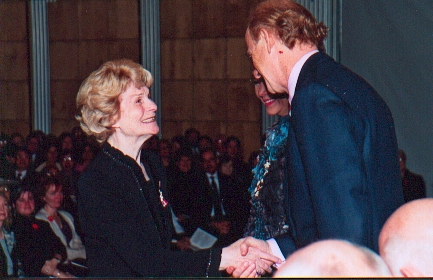