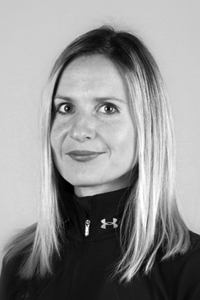 Danielle (Hobday) Hildebrand began playing ringette in 1982 at the age of six. During her career, she has played at ten Canadian Ringette Championships, receiving five all-star awards. She has been a Team Canada athlete at four World Ringette Championships and was the second leading scorer in the 2000 event, winning silver. In 2002, she was a leading scorer for Team Canada, scoring two of the three goals, including the winner in the 3-1 final, to claim gold. At those world championships, she along with a Finnish player, were named as the two forward all-stars for the event. Danielle was also captain of the 2004 national team. Outside of playing, Danielle coached AA ringette for nine years, winning one national championship and coming in second at another.  She also coached Manitoba’s Canada Winter Games team to 4th place in 2007, was a legacy coach with the junior national team that won gold in 2015, and is currently an assistant coach with the 2017 junior national team. Danielle has three children and when her oldest started playing in 2012, she began coaching her daughter’s team. Danielle has also served as the player rep on the Ringette Canada board for four years.