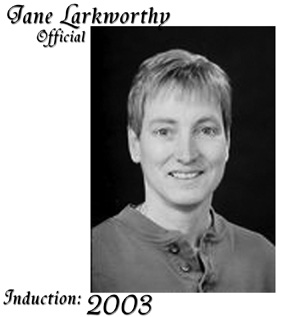 With over 25 years experience, Jane Larkworthy joins the Hall of Fame in the category that recognizes officials. Jane was an on ice official in nine (9) Canadian Ringette Championships (1979-1983 and 1985-1988) and a Supervisor in one other (1989). In addition to her role as a referee at many Canadian Ringette Championships (CRCs), Jane was Ringette Canada’s Officiating Director from 1989 to 1995, a period during which the sport underwent a number of major rule changes. Jane has also served as Director of Officials at the CRCs (1990-1995), Canada Winter Games (1991, 1995) and the World Ringette Championship (1990).

Jane authored, edited and updated virtually every officiating resource material during her tenure as Ringette Canada’s Officiating Director. In particular, she spent countless hours rewriting and editing the Rules Casebook to establish it as the excellent resource document it has become. She served as a Master Course Conductor in the Officiating Program for several years and was at this writing still active as an officiating clinic instructor.

Jane began officiating in the early 70’s and while she retired from active on-ice duty in the late 1990s, she is still an active officiating evaluator and player in Ontario. Jane also continues to represent Ringette Canada on the Canadian Standards Association (CSA) Technical Committee for Equipment and Facilities for Ice Hockey, and was instrumental in the development and implementation of CSA’s ringette-specific facial protection standard. Jane was inducted into the Ontario Ringette Association Hall of Fame as a Provincial Builder in 1990