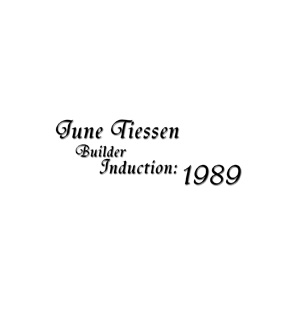 June’s first involvement with ringette was when her daughter played. She soon became president of Waterloo Minor Ringette (1970) and served the sport in almost every role for the next 5 years. She became an Ontario Ringette Association Board member in 1973 and President from 1974 to 1976. She also served as President of Ringette Canada and chaired the first National Ringette Championships. Many years of dedication to the sport have earned June Tiessen the apt title of “Grandma Ringette.”