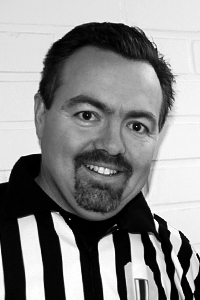 Kevin Lee began his officiating career in the mid 1980s and quickly rose through the ranks as a well-respected official. Kevin’s ability to skate, along with his calm demeanor on the ice, provided him with the special skills that make an extraordinary official. He was widely regarded as one of the premier officials in the sport, he was known as a leader among his peers both on and off the ice, and he was a mentor for many younger officials. He officiated provincial championships for more than twenty years and national championships for ten years. On the international stage, Kevin represented Canada at the first World Club Championships in 2008 and he was one of two Canadian officials selected to officiate at the 2010 World Ringette Championships in Finland. Sadly, Kevin passed away in November 2017 and has left a huge hole in the hearts of the ringette community.