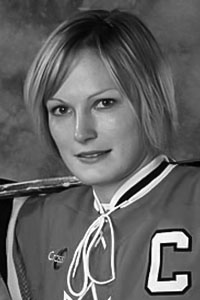 Laura Warner is a talented ringette athlete who played in Edmonton for most of her career and continues to play in Calgary where she now lives. Laura is a team player who brings out the best in her teammates and she is a leader who leads by example, showing good sportsmanship and always working to improve the game. Laura won gold at the 1995 Canada Winter Games and was an eight-time Canadian ringette champion where she was also named as an all-star. She also played in Finland in 2002 where she also became a Finnish national champion. Laura was a member of Team Canada in 1996, 2000, 2002 and 2004, winning gold in 1996 and 2002 and holding the position of captain in both 2002 and 2004. Just this past season, Laura and her teammates became provincial champions in the 19+ A division in Calgary.

“Ringette, for me, was always about being a champion for my teammates. I took my greatest pride and pleasure in encouraging and giving courage to both my individual teammates and our team as a whole. I loved the leadership and camaraderie side of elite sports and I take most pleasure in reflecting on the success that so many of my teams had and the incredible lifelong bonds forged along the way, including the one with my co-inductee, Carly Ross, whom I played with for my entire career. I’ll remember this induction as recognition of what I contributed to the synergy that my teams achieved,” commented Laura. “It is also, of course, a time to reflect on the best memories and I’m struck by the opportunities that the sport afforded me. I travelled across Canada and Scandinavia and lived and played in Finland for two winters. I spent many years teaching ringette to athletes across the country and spreading the love of the game. Those are truly cherished memories. I also, of course, share the honour with my ringette idol, Lisa Brown, to whom I owe so much.”