Lucie Anne Ingoldsby started playing ringette in 1970 and won gold at her very first Canadian Ringette Championships in 1981. She has also coached ringette in Kitchener and Calgary and has managed teams in Nova Scotia. She started officiating in 1975, attended her first nationals as an official in 1986, achieved her Level 5 ranking in 1989, officiated the first World Ringette Championship in 1990, and officiated ringette at the Canada Winter Games in 1991. In 1987 she was named as an officiating supervisor at the Canadian Ringette Championships and has carried out those duties numerous times since. She started teaching ringette referee clinics in 1985, was certified as a provincial official evaluator in 1986 and was certified as a master NOCP instructor in 1988. She has also served in various administrative capacities over the years, including a member of the Ringette Canada officiating committee, a member of the Ringette Calgary board of directors, president of Ringette Calgary, Ringette Alberta, Ringette Canada and the International Ringette Federation. Ingoldsby has also been named Official of the Year by Ringette Nova Scotia for her many contributions to the development of officials in Nova Scotia and nationally. 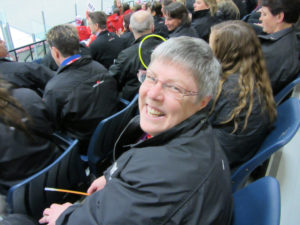