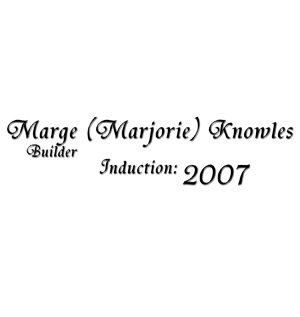 Ottawa, Ontario – April 26, 2007 – Ringette Canada today announced it has inducted the late Marge (Marjorie) Knowles to its Hall of Fame in the builder category. The Ringette Canada Hall of Fame recognizes outstanding contributions to the development of the sport of ringette and the outstanding achievements of ringette athletes, coaches and officials across Canada. The induction ceremony will take place at the Ringette Canada Conference and AGM being held in Miramichi, New Brunswick during the first weekend in June.

“Our sport is a success because of the commitment, hard work and dedication of many individuals across the country,” said Carolyne Hudson, Director at Large with Ringette Canada. “Marge Knowles’ efforts in building the sport, in British Columbia as well as nationally, were certainly significant and are to be commended. We are pleased to be able to honor her memory by recognizing her outstanding efforts with this Hall of Fame induction.”

Marge’s involvement in ringette began in the late 1970’s with the North Shore Winter Club in British Columbia. From that time until 1990, she held a number of administrative positions within this local ringette association and worked tirelessly behind the scenes to ensure the success and growth of the sport in the area. From 1990 to 1992, Marge held the position of treasurer with the British Columbia Ringette Association (BCRA) and was responsible for the development and adherence of the association’s budget. She used her skills to successfully streamline the administration of this provincial association. In 1992, Marge went on to hold the position of VP Administration with Ringette Canada, a position she held until 1995. It was at this time that federal funding for ringette ceased and Marge was involved in the critical reorganization of Ringette Canada’s finances. She also worked on policy changes with regards to the organizations finances and was responsible for office operations and staffing.

“Marge was very much a ‘common sense’ person and it was always worth one’s while to ask her to repeat her ‘mutterings’ as they often were gems of information,” noted Betsy Holt, past president of BCRA. “Marge certainly deserves to be remembered in the Ringette Hall of Fame.”