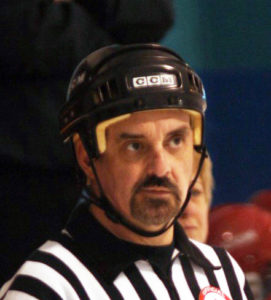 Mark Renkiewicz began his officiating career in Oshawa in 1969 and remains active in ringette over 40 years later. He officiated at the first Ontario provincial ringette championships in 1975 and has made almost consecutive appearances since that time and has been a constant figure at the Canadian ringette championships from 1980 through to 2008.

In 1981 he was the recipient of the Ringette Canada Air Canada Official of the Year award and in 1990 was the recipient of the Ontario Ringette Association Referee of the Year award. Besides his on-ice involvement, Mark has volunteered with the local, regional and provincial associations, has served as a local Referee in Chief and has instructed and evaluated young officials in the sport for decades.