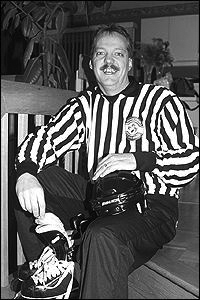 Norm Laforest has officiated at many of Ringette Canada’s prominent events since 1988, including being an on-ice official at the Canadian ringette championships from 1988 through to 2001, the world ringette championships in 2000 and 2002 and the Canada Winter Games in 1991, 1995 and 1999. He has achieved and maintained the highest level of officiating for more than a decade. In 2002, Norm received the Agnes Jacks International Award of Merit and in 2005 he was inducted into Ringette Quebec’s Hall of Fame.

In addition to his on-ice officiating abilities, Norm has also given back to the officiating program in a variety of ways. After his elite officiating career ended, he served as a supervisor at seven Canadian ringette championships and shared his knowledge and expertise with the officiating crews. He also served on the Ringette Canada Officiating Committee to help further develop the NOCP program throughout the country.