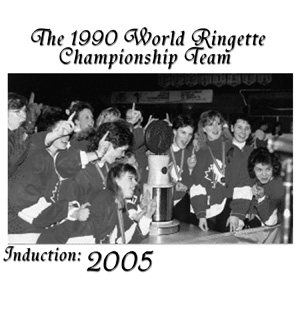 The athletes on this world ringette championship team were pioneers in establishing dominance on the international ringette scene,” said Jim Dawson, VP of promotions for Ringette Canada. “It is through their commitment, hard work and dedication that ringette has been able to build on the momentum of these early international competitions and establish its presence worldwide. It is only fitting to honor and commend these athletes by inducting them into our Hall of Fame.”

The 1990 world ringette championship team hailed from Alberta and participated in the first-ever world ringette championship held in Gloucester, Ontario. Ontario won silver and Quebec picked up bronze in the event, which also saw teams from Gloucester, Manitoba, Saskatchewan, Finland and the USA participating. The following is the roster for the 1990 Alberta gold medal team (including where they were playing ringette):