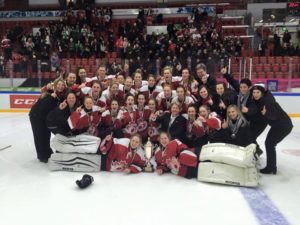 Helsinki, Finland – January 3, 2015 – Canada’s junior team took down the Finns 10-9 in overtime to claim gold at the world ringette championships today in Helsinki. The Canadian squad were undefeated in round robin play and beat the Finns in two games of a best of three series.

“It feels freaking amazing,” said Ottawa’s Sarah-Lynne Begin, who scored the overtime winner. “I was a bit nervous going into the second game, but looking around at the girls in the dressing room, I knew we were ready and I knew we could do it.”

In addition to picking up the game winner, Begin picked up a second goal and three assists in the game. She was named player of the game for Canada and also picked up top center and MVP for Canada for her performance in the event.

Guelph’s Abby Richardson and Moncton’s Jenny Snowdon picked up hat tricks in the game and Moncton’s Britney Snowdon contributed a single. Other event awards for Canada include Boucherville’s Laurie St-Pierre as top goalie and the Snowdon sisters as top forwards.

Following the game, awards for the Sam Jacks series were awarded with Calgary’s Christianne Varty picking up the top defenseman award and Calgary’s Shaundra Bruvall being named MVP for Canada.

Earlier in the day, Sweden beat USA 8-5 to force a game three for the bronze medal in the President’s Pool. That game will take place at 12:30 tomorrow, January 4.

All games are being live webcast and can be accessed through the following links:
President’s Pool: https://www.youtube.com/user/RingetteTV

About Ringette
Ringette is a Canadian sport that was invented in 1963 in North Bay, Ontario by the late Sam Jacks. There are currently nearly 30,000 players on nearly 2,000 teams across Canada, with over 1,500 officials and nearly 8000 coaches. Internationally, it is played in more than a half a dozen other countries around the world. Ringette has been designated a Heritage Sport by Sport Canada and as part of the Sport for Life movement, ringette is well advanced at adapting Sport Canada’s Long Term Athlete Development model. For more information, please refer to the Ringette Canada Web site at www.ringette.ca.

For more information, please contact our media representative who is onsite in Helsinki: