Congratulations to Terry McAdam on being officially inducted into the Ringette Canada Hall of Fame.

Congratulations to Terry McAdam on being officially inducted into the Ringette Canada Hall of Fame this past weekend. 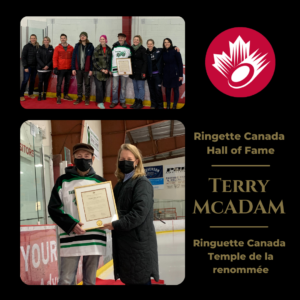 Terry is the 5th person from Saskatchewan to be inducted into the Hall of Fame since 1988, an auspicious accomplishment indeed.
Denise Treslan, a member of the Ringette Canada Board of Directors, was grateful to be able to present the award to her friend Terry. She said, ‘Thanks again for giving me the opportunity to present this to Terry. He was thrilled with the presentation and in his remarks, he couldn’t pass up the opportunity to continue to promote the event and invite people out to watch the new Saskatchewan Heat NRL team play.’
More from Denise Treslan’s speech,
“I’m deeply honoured to represent Ringette Canada and to present this to one of my friends.
Terry and I both grew up in Conquest, a small town not far from here, which was also home to one of the first ringette programs in Saskatchewan. And while I don’t know if Terry was involved with ringette back then, he has more than made up for it over the last 20 plus years!
Terry’s dedication to ringette is limitless, with a lengthy list of accomplishments:
How very lucky we are that it all started with one of his favourite roles – being a Ringette Dad.”
Coach and former Team Canada National Team player Mel Brockman, also spoke at the ceremony thanking Terry for his years as a coach and a mentor for her and her teammates. Fourteen of the women Terry coached have become coaches and/or join the local association. A great legacy indeed.
https://globalnews.ca/video/8373438/fifth-saskatchewan-person-inducted-to-ringette-canada-hall-of-fame/?fbclid=IwAR0ftGVd9Qe8cr2iiOu-sWUcioBflMAT-wIfFcpqXwXixADJjvDpuFOSzLk