Ottawa, ON – May 21, 2019 – Ringette Canada is pleased to announce its junior national team roster that will compete at the 2019 World Ringette Championships taking place in Burnaby, BC from November 25 to December 1, 2019. The 22 athletes were named following a selection camp that was held in Ottawa, Ontario this past weekend.

“We are very excited to ice such a strong and powerful group of young athletes for this team,” said Lorrie Horne, head coach, Ringette Canada’s junior national team. “This is a diverse group of young Canadians, from seven provinces, who are ready to prepare themselves in their pursuit of a world championship.”

The following are the 22 athletes who will represent Canada on the junior national team:

The next training camp will being held in Sherwood Park, AB from August 29-September 2 and another one will be held in Burnaby, BC from October 10-14. The 2019 World Ringette Championships that will take place from November 25 to December 1, 2019 in Burnaby, BC.

Ringette is a Canadian sport that was invented in 1963 in North Bay, Ontario by the late Sam Jacks. There are currently over 31,000 players on nearly 2,000 teams across Canada, with over 1,500 officials and nearly 8000 coaches. Internationally, it is played in more than a half a dozen other countries around the world. Ringette has been designated a Heritage Sport by Sport Canada and as part of the Sport for Life movement, ringette is well advanced at adapting Sport Canada’s Long Term Athlete Development model. For more information, please refer to the Ringette Canada Web site at www.ringette.ca.

play it. love it. live it. | mon sport. ma passion 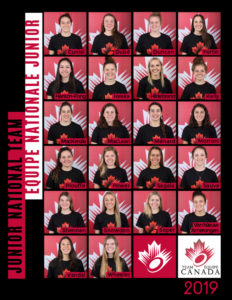