Ottawa, Ontario – September 8, 2016 – Ringette Canada today announced that Mississauga has been selected as the host for the 2017 World Ringette Championships. The event, which will be held from November 27 to December 3, 2017 at Hershey Centre (5500 Rose Cherry Place), will see the world’s top ringette athletes compete for junior and senior gold.

“We are very excited that the next World Ringette Championships will be hosted in Canada and are confident that Mississauga will make our sport proud,” said Frances Losier, Director of High Performance and Events, Ringette Canada. “We have been focusing our efforts on high performance ringette in Canada and we look forward to witnessing our Canadian teams hitting the ice next Fall.”

Ringette is a Canadian sport that was invented in 1963 in North Bay, Ontario by the late Sam Jacks. There are currently over 30,000 players on nearly 2,000 teams across Canada, with over 1,500 officials and nearly 8000 coaches. Internationally, it is played in more than a half a dozen other countries around the world. Ringette has been designated a Heritage Sport by Sport Canada and as part of the Sport for Life movement, ringette is well advanced at adapting Sport Canada’s Long Term Athlete Development model. As a proud member of True Sport, Ringette Canada is committed to sport that is values-based and principle-driven. For more information, please refer to the Ringette Canada Web site at www.ringette.ca. 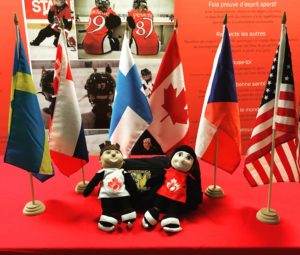