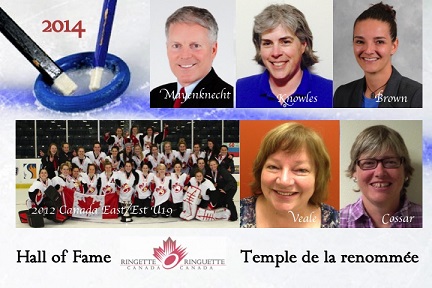 Ottawa, Ontario – September 9, 2014 – Ringette Canada today announced it has inducted five new members and one team into its Hall of Fame. Inductees include Tom Mayenknecht (Vancouver, BC) in the builder category; Laura Knowles (Ottawa, ON) in the official category; Beth Veale (Calgary, AB) in the coach category; Keely Brown (Edmonton, AB/Kitchener, ON) and Janice Cossar (Dartmouth, NS) in the athlete category; and the 2012 Canada East U19 team.

“Our sport is successful because of the hard work and dedication of many individuals across the country and this year’s Hall of Fame inductees are no exception,” said Daniel Dussault, Ringette Canada president. “From the 2012 Canada East U19 team to Tom in the builder category, Laura on the officiating front, Beth in the coaching category, and Keely and Janice as athletes, it gives me great pleasure to be able to recognize these well-deserving individuals with an induction into our Hall of Fame.”

Beth Veale has been a valuable contributor to the growth of ringette for many years as a coach, player, instructor, coach developer and author. She wrote many resources in the late 80’s for the coaching and athlete committees and she also helped write the Community Sport Initiation Course, the Competition Introduction 1 Course and the Competition Development Course. In 1996, Beth achieved her Level 3 technical course and also completed her Level 3 coaching certification. She has been a very effective NCCP Course Conductor and NCCP Learning Facilitator for the last thirty years, training coaches to be the best they can be. She has been a Master Learning Facilitator for the past six years and is a member of the Coach Developer Team that was established in 2012. For the past ten years, Beth has worked with AA teams from Calgary and her teams have represented Alberta at the Canadian Ringette Championships for many of those years. Beth provides leadership, stability, ringette knowledge and skill when working with athletes and as an educator she is always looking for better ways to improve the sport.

“I believe the strength of this remarkable sport is in the competence, dedication and integrity of its people, especially the coaches who are the face of ringette for the players. I have experienced this first hand, having played for and coached with many amazing people who have motivated their players to become successful young adults far beyond the world of ringette. My mission is to ensure that our coaching programs continue to develop the very best coaches in the world,” commented Veale. “I am incredibly honoured and grateful to be recognized by Ringette Canada for my efforts and to be included in this prestigious group, many whom I have had the privilege to work with and whom I have greatly admired, including my ringette idols, Linda Anderson (Tippin), and Phyllis Sadoway.”

Keely Brown is a name synonymous with ringette goaltending. Keely grew up playing ringette in Kitchener, Waterloo and Sudbury before moving to Alberta where she played with the National Ringette League’s Edmonton WAM! Keely participated in 19 Canadian Ringette Championships, winning nine gold and eight silver medals, and she was on the senior national team for 14 years and attended five world championships, winning one gold and four silver medals. Keely was the goalie coach Team Canada (senior) in 2013 and was the goalie coach for Team Canada U19 West in 2012. Keely runs her own company, 5-Count Ringette Goalie Instruction, along with Heather Konkin. 5-Count has 25 ringette goalie instructors and has run ringette goalie camps, clinics and ice times from BC to PEI, with the goal of providing top quality ringette goaltending instruction to ringette goalies all across Canada. She has also written a book titled “The Complete Guide to Ringette Goaltending.”

“It is such an amazing honour to be included among the many great athletes in the Ringette Hall of Fame, especially so soon after my retirement from the senior national team,” said Keely. “Ringette has always been a main passion and focus of mine – from the opportunities and experiences of travelling and competing across Canada and Europe, to the many friends I have made throughout my playing career. Ringette is such a fun, fast paced sport that is continually improving to make it even more exciting – truly a great sport to play and compete in.”

Janice Cossar began playing ringette in Nova Scotia in 1974. Her playing career spanned 25 years and she represented Nova Scotia at the Canadian Ringette Championships over three decades (70’s, 80’s, and 90’s). She was known nationally as a ‘ringette superstar’ and was one of the first trailblazers in the sport of ringette who made a national impression at every event she attended. Spectators and coaches from all provinces came to watch Nova Scotia games just to see Janice Cossar play and find a way to defend against this outstanding offensive player. Her name and achievements were consistently published in the “Ringette Review” and regularly announced at award ceremonies.

“I am humbled to think of all the amazing athletes, coaches, managers and executives I have been exposed to over the years and am proud to bring a part of them with me to the Hall of Fame,” commented Janice. “Lessons I learned playing the sport of ringette have helped shape and mould the person I am today and I am so thankful for this tremendous honour.”