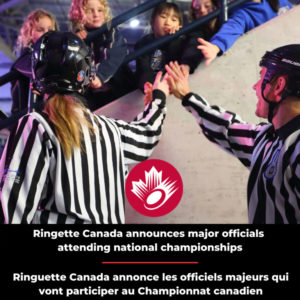 Ottawa, Ontario – March 23, 2022– The 2022 Canadian Ringette Championships will get underway in Calgary, Alberta on April 3rd and teams from across the country will compete for national titles in the U16 and U19 divisions, as well as the National Ringette League championship title. Ringette Canada today announced the major officials who have been selected to attend the national championships.

The officiating team at the event will consist of one director of major officials, six supervisors, 33 on-ice officials and 12 shot-clock operators. They include:

About Ringette
Ringette is a Canadian sport that was invented in 1963 in North Bay, Ontario by the late Sam Jacks. There are currently over 31,000 players on nearly 2,000 teams across Canada, with over 1,500 officials and nearly 8000 coaches. Internationally, it is played in more than a half a dozen other countries around the world. Ringette has been designated a Heritage Sport by Sport Canada and as part of the Sport for Life movement, ringette is well advanced at adapting Sport Canada’s Long Term Athlete Development model. As a proud member of True Sport, Ringette Canada is committed to sport that is values-based and principle-driven. For more information, please refer to the Ringette Canada Web site at www.ringette.ca.