We are delighted to announce that we have appointed Jenni Lloyd as our new Communications, Engagement & Marketing Director.  Jenni is a professional sport administrator with 11 years of experience growing, developing and sharing the power of sport.  A native of North Bay ON, Jenni now resides in Ottawa with her husband and 2 children.  Jenni is a former varsity athlete at Acadia University where she played soccer for 4 years while completing her BSc. More recently, Jenni returned to Canada from Scotland, where she lived for 15 years.  Jenni moved to Scotland to complete her MSc in Medicine & Science in Sport and Exercise, a unique course that was offered across all 3 major universities in Glasgow.  Jenni was a player and then coach for the Strathclyde University Volleyball team and then became the Youth Development Manager with the Scottish Volleyball Association, aligning the junior program along the LTAD pathway and was part of the team that created the UKCC, a UK wide coaching accreditation for volleyball.  Jenni then transitioned to a multi-sport environment when she was hired to create, and scale Scottish Colleges Sport for the College sector when no National Sports programs had previously existed. Scottish Colleges Sport then amalgamated with Scottish University Sport and Jenni then took on a position of Operations, Communications and Marketing in the new association, Scottish Student Sport.  Jenni also served as a Board member, and eventually Chair, of the YWCA Scotland – The Young Women’s Movement, which helped provide leadership opportunities and promoted the voices and opinions of young women across the country.  Jenni is also passionate about giving back to the community through running her own business called Mellow Baby, which helps new families learn skills in their first year.

‘I am very proud to be joining the great team at Ringette Canada.  The passion and history that exists in this community has really blown me away.  To become a team member of this national organization is something I take pride in, not only because of the impactful work it has done in the past but also what it will continue to do into the future. Communications and engagement are not only things that I do for work, but are things that I am incredibly passionate about.  To be able to harness the power of sport be able to reach people across the country is something incredibly special and I am very excited to get to work and engage with this great community.’ 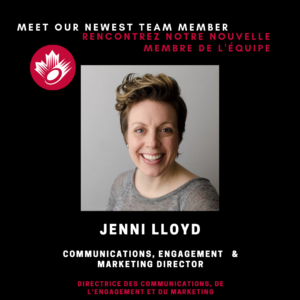 About Ringette
Ringette is a Canadian sport that was invented in 1963 in North Bay, Ontario by the late Sam Jacks. There are currently over 30,000 players on nearly 2,000 teams across Canada, with over 1,500 officials and nearly 8000 coaches. Internationally, it is played in more than a half a dozen other countries around the world. Ringette has been designated a Heritage Sport by Sport Canada and as part of the Sport for Life movement, ringette is well advanced at adapting Sport Canada’s Long Term Athlete Development model. As a proud member of True Sport, Ringette Canada is committed to sport that is values-based and principle-driven. For more information, please refer to the Ringette Canada Web site at www.ringette.ca.