Ottawa, Ontario – November 7, 2017 – Ringette Canada today announced the induction of four new members into its Hall of Fame. The new inductees include Dwayne Andreen (Saskatoon, SK) in the builder category, Lucie Anne Ingoldsby (Waverly, NS) in the official category and Alexis Snowdon (Edmonton, AB) and Danielle (Hobday) Hildebrand (Oakbank MB) in the athlete category. The Ringette Canada Hall of Fame recognizes outstanding contributions to the development of the sport of ringette and the outstanding achievements of ringette athletes, coaches, officials and administrators across Canada.

“A sport grows and becomes great because of the hard work and dedication of many individuals,” said Daniel Dussault, Ringette Canada president. “It is my pleasure to be able to recognize the contributions that Dwayne, Lucie Anne, Alexis and Danielle have made to ringette. Without their efforts, our sport would not be what it is today and I congratulate each of them on their induction into our Hall of Fame.”

Dwayne Andreen started coaching ringette in 1982 when his daughter Kim began playing. He continued to be involved with the sport for 30 years as a coach, volunteer, organizer, board member (locally, provincially and nationally), supporter and advocate. Dwayne pushed his players to be the best they could be by instilling confidence and belief, and creating a positive learning environment. He also treated his players equally, regardless of individual talents and roles. Dwayne was instrumental in the creation of the Saskatoon Wild in the National Ringette League and coached the team for seven seasons. He also coached teams at the Canadian Ringette Championships and the Canada Winter Games (winning bronze in 1999). Dwayne is a true ambassador for ringette and his contributions as a visionary and leader have helped grow ringette in both Saskatchewan and across Canada. Dwayne will be receiving his induction award on November 11th at the Bernadette Price Memorial Tournament being held in Saskatoon.

Lucie Anne Ingoldsby started playing ringette in 1970 and won gold at her very first Canadian Ringette Championships in 1981. She has also coached ringette in Kitchener and Calgary and has managed teams in Nova Scotia. She started officiating in 1975, attended her first nationals as an official in 1986, achieved her Level 5 ranking in 1989, officiated the first World Ringette Championship in 1990, and officiated ringette at the Canada Winter Games in 1991. In 1987 she was named as an officiating supervisor at the Canadian Ringette Championships and has carried out those duties numerous times since. She started teaching ringette referee clinics in 1985, was certified as a provincial official evaluator in 1986 and was certified as a master NOCP instructor in 1988. She has also served in various administrative capacities over the years, including a member of the Ringette Canada officiating committee, a member of the Ringette Calgary board of directors, president of Ringette Calgary, Ringette Alberta, Ringette Canada and the International Ringette Federation. Ingoldsby has also been named Official of the Year by Ringette Nova Scotia for her many contributions to the development of officials in Nova Scotia and nationally.

Danielle (Hobday) Hildebrand began playing ringette in 1982 at the age of six. During her career, she has played at ten Canadian Ringette Championships, receiving five all-star awards. She has been a Team Canada athlete at four World Ringette Championships and was the second leading scorer in the 2000 event, winning silver. In 2002, she was a leading scorer for Team Canada, scoring two of the three goals, including the winner in the 3-1 final, to claim gold. At those world championships, she along with a Finnish player, were named as the two forward all-stars for the event. Danielle was also captain of the 2004 national team. Outside of playing, Danielle coached AA ringette for nine years, winning one national championship and coming in second at another.  She also coached Manitoba’s Canada Winter Games team to 4th place in 2007, was a legacy coach with the junior national team that won gold in 2015, and is currently an assistant coach with the 2017 junior national team. Danielle has three children and when her oldest started playing in 2012, she began coaching her daughter’s team. Danielle has also served as the player rep on the Ringette Canada board for four years.

Ringette is a Canadian sport that was invented in 1963 in North Bay, Ontario by the late Sam Jacks. There are currently over 30,000 players on nearly 2,000 teams across Canada, with over 1,500 officials and nearly 8000 coaches. Internationally, it is played in more than a half a dozen other countries around the world. Ringette has been designated a Heritage Sport by Sport Canada and as part of the Sport for Life movement, ringette is well advanced at adapting Sport Canada’s Long Term Athlete Development model. As a proud member of True Sport, Ringette Canada is committed to sport that is values-based and principle-driven. For more information, please refer to the Ringette Canada Web site at www.ringette.ca. 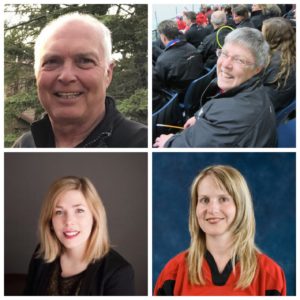