Angie Milbury, President of Ringette Canada, announced today that four individuals have been inducted into the Ringette Canada Hall of Fame in the Official and Builder Categories.

“The Ringette Hall of Fame is proud to welcome these incredible individuals,” said Milbury. “Their contributions to the sport of ringette are well documented and their induction to the Hall of Fame is richly deserved.” 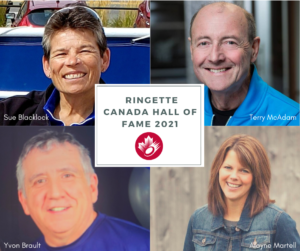 In the Officials Category, one individual was elected.

In the Builder Category, 3 individuals were elected.

‘Terry is such a well-known figure in the ringette committee. You would be hard pressed to find someone that doesn’t love Terry. He treats everyone equally and always shows respect for his players, fellow coaches, opponents, volunteers, and referees. He is the epitome of what ringette represents.’