Mississauga, ON – December 2, 2017 – Team Canada juniors are good as gold again after defeating Finland 9-6 in game two of the best two out of three game series at the 2017 World Ringette Championships today. The defending world champions made an amazing comeback in the second half to claim the world title.

Assistant captain Sydney Nosal (St. Clements) notched a hat trick and three assists and was named player of the game for Canada. Winnipeg’s Alana Lesperance and Moncton’s Britney Snowdon both picked up pairs, with singles coming from Marie-Pier Blanchard (Ste-Julie, QC) and Moncton’s Jenny Snowdon scoring the game winner. Event awards were handed out following the game, with Jenny Snowdon being awarded MVP for the junior pool and Boucherville’s Laurie St-Pierre was named MVP for Canada.

“It is such a surreal experience,” said Sydney Nosal following the win. “We battled and worked hard and we regrouped at the half. We played our style of game and came together as a team.”

Going into today’s game down by one, the Canadian senior team put forth a hard-fought battle but were not able to force the best two out of three series to a final game. The defending world champion Finns claimed their sixth consecutive world title, defeating Canada 11-5. Calgary’s Shaundra Bruvall scored a hat trick for Canada, with singles coming from Nepean’s Kelsey Youldon and Lacombe’s Dailyn Bell. Dailyn Bell picked up the player of the game award for Canada and Shaundra Bruvall was named MVP for Canada for the event.

Earlier in the day, USA downed Czech Republic 15-1 to move into tomorrow’s Presidents’ Pool final against Sweden. Czech Republic go home with bronze. USA and Sweden will play for gold at 10:25am (EST) at the Hershey Centre.

All games are being live webcast (and archived) and can be accessed here: www.ringettecanada.tv. The official host website of the event is www.worldringettechampionship2017.com and includes links to rosters, schedules and stats. Photos from the event can be found on our Ringette Canada Flickr page, which can be accessed here: https://www.flickr.com/photos/ringettecanada/albums/72157666302942949.

About Ringette
Ringette is a Canadian sport that was invented in 1963 in North Bay, Ontario by the late Sam Jacks. There are currently over 30,000 players on nearly 2,000 teams across Canada, with over 1,500 officials and nearly 8000 coaches. Internationally, it is played in more than a half a dozen other countries around the world. Ringette has been designated a Heritage Sport by Sport Canada and as part of the Sport for Life movement, ringette is well advanced at adapting Sport Canada’s Long Term Athlete Development model. As a proud member of True Sport, Ringette Canada is committed to sport that is values-based and principle-driven. For more information, please refer to the Ringette Canada Web site at www.ringette.ca.

play it. love it. live it. | mon sport. ma passion 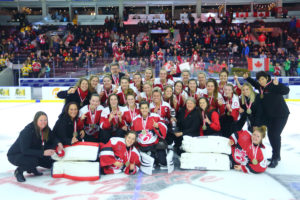