Why isn’t ringette in the Olympics?

Why isn’t ringette in the Olympics?  Great question!  And one that is brought up frequently to Ringette Canada.  The process to become an Olympic sport is an interesting one, so we wanted to share how and why sports get chosen to be part of the Olympic games and how ringette fits into this picture. 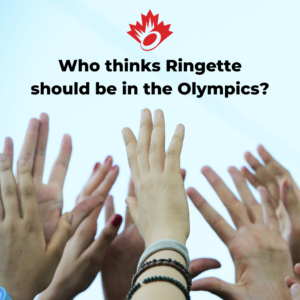 The Olympic Games have expanded from 241 to more than 10,000 competitors since the original reestablishment in Athens with the 1896 Games. Dozens of additions and changes have been made in the Olympic program since 1896, with almost 100 events being added since 1980 alone. These decisions are typically made seven years ahead of the next Games.  Although enthusiasts of many activities hope to see their avocations become Olympic sports, only a few receive one of the coveted slots in the Olympic program.

The first step in the process of becoming an Olympic sport is recognition as a sport from the International Olympic Committee (IOC). The IOC requires that the activity have administration by an international nongovernmental organization that oversees at least one sport. Once a sport is recognized, it then moves to International Sports Federation (IF) status. At that point, the international organization administering the sport must enforce the Olympic Movement Anti-Doping Code, including conducting effective out-of-competition tests on the sport’s competitors while maintaining rules set forth by the Olympic Charter. So, does ringette have IF status? Yes we do, but ringette’s IF has not yet been recognized by the IOC.

A sport may gain IOC recognition but not become a competing event at the Olympic Games. Bowling and chess are recognized sports, but they do not compete at the Games. To become a part of the Games, the sport’s IF must apply for admittance by filing a petition establishing its criteria of eligibility to the IOC. The IOC may then admit an activity into the Olympic program in one of three different ways: as a sport; as a discipline, which is a branch of a sport; or as an event, which is a competition within a discipline. For instance, triathlon was admitted as a sport, debuting at the 2000 Games in Sydney. Women’s wrestling was a new discipline in the sport of wrestling at the Athens Games, and women’s pole vaulting debuted in Sydney as a track-and-field event. Rules for admittance vary slightly between a new sport, a discipline, and an event, but the intent is the same.  New sports coming in have to show where they fit.

Once an IF has presented its petition, many rules and regulations control whether the sport will become part of the Olympic Games. The Olympic Charter indicates that in order to be accepted, a sport must be widely practiced by men in at least 75 countries and on four continents and by women in no fewer than 40 countries and on three continents. This is a tricky one for ringette because Ringette Canada can’t force other countries around the world to play ringette like we do.  By promoting the sport here in Canada and playing it well, it has risen in global popularity. Internationally, half-a-dozen countries currently participate and organize in the sport of ringette, particularly those situated in the Northern Hemisphere. Ringette is currently organized and played in the countries of Canada, Finland, Sweden, United States, Czech Republic, and Slovakia with the largest community in Canada with over 50,000 participants registering annually. There are other countries that are starting to play, but they are not yet at the level of having a National Association to represent them.

There are also lots of requirements for the sport – a rink is required, and certain equipment, and that can be a barrier to new countries participating.  We have lots of rinks in Canada, we don’t think twice about the ease of going down to our local ice rink, but there are many countries who hardly have any.  If you think of soccer, one of the most popular sports in the world, all you need is a ball and kids can play, this is one of the reasons that the sport is so widely played, easy, inexpensive access.  So, at this time, there are still not enough countries participating for the Olympic committee to give it consideration.

The sport must also increase the ‘‘value and appeal’’ of the Olympic Games and retain and reflect its modern traditions. Ringette is a definite ‘yes’ in this category.  Great atmosphere, excellent community, the game is fast and fun, it would be an appealing sport to add.  One of the most important rules in ringette is passing the ring over the blue line.  With this rule in place, you have to pass it over to one of your teammates. With ringette, it’s the whole team that is involved. Every player is equal. It is the ultimate team game.

In recent years the IOC has worked to manage the scope of the Olympics by permitting new sports only in conjunction with the simultaneous discontinuation of others. Sports that have already been part of the Games are periodically reviewed to determine whether they should be retained. The Olympic Program Commission notes that problems have arisen when trying to find venues to accommodate some sports’ specific needs, such as baseball and softball, which were discontinued from Olympic programming after the 2008 Beijing Games. So, even a sport like baseball, which has long been an Olympic fixture, can just randomly be put out for an Olympics because venues are not readily available. Both of these sports are in for Tokyo, but at present time, it looks as if neither sport has made the cut for 2024. When choosing sports to include in the program, the IOC must take into consideration media and public interest, since these are a key drive behind the Olympic Games but must simultaneously manage costs.

While several events have been added to the Games since their resumption in 1896, a good number have been sidelined. Tug-of-war, for example, was once a respected Olympic sport. Cricket, lacrosse, polo, power boating, rackets, rink hockey, roque, and water skiing were all once part of the Olympic Games but have been discontinued over the years.

Considering ringette was only recently invented (1963 is pretty recent, right?) it has grown massively.  Right now, The World Ringette Championship is the elite international amateur competition for the sport, the first of which took place in Canada in 1990.

Ringette is most widely played by females, so it would be a large step for the feminist equality to get the game recognized as an Olympic sport, which is a good thing.  However, an issue which would stem if ringette made it into the Olympics would be that there may not be enough attention to create male teams. Ringette Canada has recently launched Equal Opportunity for Participation Guidelines This means that Ringette Canada is encouraging associations to offer programming in three separate categories: girls/women only, boys/men only and mixed to encourage more widespread participation.

The choice of which sports take part in the Olympics is up to the 90 members of the International Olympic Committee (IOC) who make the decision based on proposals from each games’ local organizing committee, via the Olympic Program Commission.

These proposals are evaluated against five categories, split into 35 criteria:

All the work that sports do in putting together a proposal and lobbying at continental meetings cannot guarantee a positive outcome.  So even if ringette hits all the marks, it may never get in, which could be simply based on the preferences of the IOC Members.

But it’s not just the IOC calling the shots. A host city can also play a role in the decision, and push for a particular sport for the year that they are hosting. For a real-world example, look no further than the 2024 Games to be held in Paris, which will see the debut of breakdancing as an Olympic sport.

It is so important to remember that being in the Olympic Games will not make ringette a great sport.  Ringette is a great sport.  Period.  The end.  It’s fast.  It’s fun to watch.  Spectators love it and it is the ultimate team sport.  These are truths, and they don’t change because it is not yet in the Olympics.